In the 1901 census, Bridget Forde, had a job which was vastly different to the standard rural occupations. Instead of the usual domestic servant or kitchen work or farming work Bridget was a “Shampooer in Turkish Baths”. This immediately conjures images of grandeur and extravagance, well deserved when you consider this picture is one from the interior of St Ann’s Hydro Turkish baths. 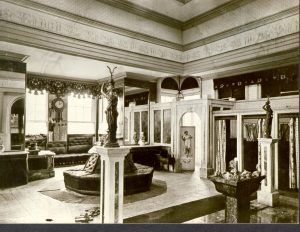 According to “A Dictionary of Occupational Terms” a shampooer is not quite the same as what the modern day interpertation is. While we automatically think of hairdressing back in Victorian times and the early 20th century a “Shampooer (turkish bath); rubs, soaps and douches bathers after they have perspired sufficiently; often also gives massage, and rubs in medicated ointments as desired or prescribed; usually stokes fires from time to time. “

So what did an afternoon spent in the Turkish bath of the Hydro hotel entail?

The guests would enter into an elegantly decorated dressing room, the Refridarium, where they would change into robes and would then be led through a series of heated rooms where they would sit, relax and let their body temperature rise; the final room, the Sudatorium, being heated to 95 degrees. A professional shampooer would then thoroughly scrub the guests from head to toe. All impurities washed away before the guests would plunge into a pool of cool water and then emerge to be massaged and finally led to a relaxation room to lie back and more than likely, sleep! 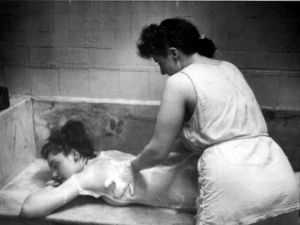 Dr Barter believed that sweating out all the impurities in the body and replacing them with fresh water was the best way of fighting these diseases. His prescription, for almost everything, was the purging of the skin.

The Twitter account, Save our Turkish Baths, has some lovely details of the actual layout of the rooms and the equipment it would contained. They have also shared this picture which shows what Bridget would have done in her day-to-day job, she would have had incredible strength to massage and knead people’s backs and legs week in, week out.

Not only would Bridget have earned her weekly wage but it is quite likely that she would have received extra income from tipping. According to the Victorian Turkish Baths site:

“Like those in a number of other occupations which provide for the individual needs of their clients, shampooers rely upon tips as an indispensable part of their income. Again, following the tradition established by Urquhart, and as is the practice in many restaurants today, tips were shared among the whole staff.”

Bridget lived in one of the houses that Sir Richard Barter had provided for his staff in Cloughphilip. She and her sister Nano, whose occupation was listed as a caretaker, lived alone in one of the two-bedroomed cottages. Ten years later, recorded in the 1911 census, Nano and Bridget are still in the same house and Nano, now recorded as Norah, has married Jeremiah Long. Norah is a housekeeper while Bridget is now a domestic servant. It is possible, that at nearly sixty, Bridget was no longer physically able to carry out her duties that being a Turkish Bath shampooer/masseuse entailed.

But for a period of time Bridget bucked the trend of the  average occupation Irish females had at the turn of the century, people must have thought Dr Barter was mad when he first introduced the Turkish baths to the local population!