Head up the Old Kerry Road from Tower Cross, take the very first turn on your right and you are on a cul de sac known locally as Buckers Lane. The road climbs slightly, following the hills through the area called Cloghphilip.
The road plateaus and ambles gently northwards through green fields and heavy hedgerows until it turns sharply eastwards and peters out. Here at the end of the lane the remains of Cloghphilip Castle stand, the castle that gives the area its name. Cloghphilip literally translates as the “stone house of Philip” and was owned by Cormac McCarthy, who also owned the more famous castle along the way at Blarney.
On a side note there is a very interesting article here that a schoolboy from the 1930’s wrote recalling local folklore about the castle.
Very little of the castle remains today, some walls and tumbled down blocks, overgrown with moss and bushes but up until the recent past people would continue to walk the road, past the castle and into the grounds of the Hydro Hotel. Many staff members commuted to and from work along this roadway, bicycling or on foot, heading to work in the grounds and gardens of the hotel, or even in the Turkish Baths itself.
The laneway itself, from its branching off the Kerry Road to the end at Cloghphilip Castle, is known locally as Buckers Lane. The name Bucker originates from twin brothers, Frank and Benjamin Buckworth, who were born in Cambridgeshire in the UK in 1871.
Frank and Benjamin were born in a village called Thornley along with their three other siblings. Their father, Francis, was a farmer who also had his own village shop as a butcher.  Twenty years later both Frank and Benjamin had left home to make their own way in life.
Frank was working as a “Confectioners Assistant” in 1891 in Northallerton, which is approx. 160 miles north from Thornley in Yorkshire.
Benjamin meanwhile had made his way to the other side of England, Bournemouth to be precise, where he was learning his trade as a grocer’s assistant in a shop on Exeter Road. The shop was on the main street, that ran down to the sea, so no doubt was busy with tourists and day trippers. He stayed here for at least three years, living above the shop, where he progressed from “Grocers Assistant” to “Grocers Manager”.
It is interesting to note that at this time Benjamin’s name can be found on the United Grand Lodge of Freemason membership list; he was initiated in 1897 and his name remained on the list for Lodge Hengist until 1901 when it appears that he moved to Ireland. 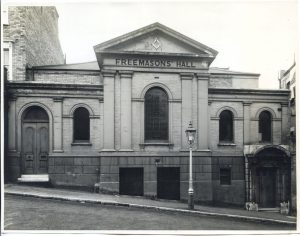 Freemasons’ Hall (Snow Togs), 4/6 St Michael’s Road, Bournemouth
In 1901 Frank was staying as a guest in his uncle’s house on South Terrace in Cork city where he had listed his occupation as a “Commission Agent”. Frank’s uncle, William Foreman, was originally from Cambridgeshire and lived in Cork where he had a merchant and grazier business. He had married a Cork native, Anna Maria and they lived in a large house on South Terrace. 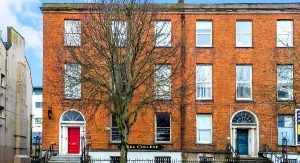 South Terrace Cork
In an unrelated, but interesting nugget of information, living in the house on South Terrace in 1901 with Frank Buckworth was a young boy named Stephen Farrington who was George’s grandson. Some fifteen years later Stephen Farrington, a qualified architect who was appointed Cork City Engineer, would go on to design two of Cork’s most famous landmarks, the “Shaky” bridge and the now defunct Lee baths!
In 1907 Frank was listed as living/working out of 38 Merchant Street.
At the next census in 1911, Frank was staying at a hotel on Queen’s Square in Fermoy. His occupation is still listed as a Land Commission Agent, unfortunately it is unclear how long Frank had stayed in the hotel or who he was employed by.
In 1913 he is on Grand Parade.
In the 1921 Business Directory for Cork city there is an entry for “Frank Buckworth, 18 Merchants Quay, telephone 539” under the heading “Commercial and Manufacturers Agents”; so, Frank continued to work as some sort of intermediary between buyers and sellers of land, business and products. His early years working in his father’s butchers shop must have stood him well.
In the British Phone Book for 1921 Frank has a telephone, number Blarney 7, and his address is St Ann’s Hill so it is safe to assume that Frank had moved out to Tower at this stage. 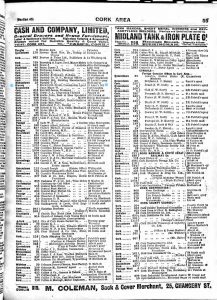 British Phone Book 1921 – entry for Frank Buckworth highlighted with a blue dot
The 1945 edition of the Cork Business Directory still has Frank listed as a Commercial Agent, but his address is now St Ann’s Hill Hydro.
Frank passed away in April 1947, he was living in one of the houses that were built on the grounds of the Hydro hotel. He was 76 years of age. According to the Wills Administration he left £3,818 18s 1d to his brother Benjamin, a Company Director, which is the equivalent to £140,000 today.
Neither brother appears to have married or had a family. I am unable to find any photo of the brothers and so am unsure if they were identical twins or not. If anyone has any information on them or even a photograph I would be delighted to see it.
Franks’ twin brother Benjamin was listed as being a boarder in the Hydro hotel on the night of the census in 1911. It is possible that this is when he fell in love with the area as he went on to purchase Cloughhpilip Farm and lived the rest of his life there. He died in 1952.
Cloghphilip Farm was originally part of St Ann’s Hill Hydro hotel. The Buckworth brothers purchased it in 1907 from Dr Richard Barter and ran the pig farm from here.
It seems that Benjamin had a deep and abiding love for the farm and the area in which it was situated. So much so that he wrote a small book extolling the virtues in 1947. The writing Benjamin uses is punctuated with Latin and, what we would consider a rather flowery turn of phrase. For instance, below is an extract describing the purchase of Cloughhpilip Farm.
“On the morning of the sale, a forceful poem of the series reached us. The boatman in the poem had rowed across the ferry and assisted from the raft his fair and lovely passenger, allowing the fated moment to pass without addressing her.
“Ill fortune passa” concluded the poem, “Never again will he touch her hand”.
“I have been to the sale” said my brother Frank to me later in the morning, “Ill fortune passa” – the song possessed me. “I have bought Cloughphilip Farm.”
The contour of the farm is certainly informal, but what is lost in compactness is more than compensated for in the rich variety of views its sprawling surface dominates. Upon three sides it is surrounded by the Shournagh and the Ardrum Valley as with a huge protecting moat, causing the fertile hillsides round to stand out in focus of a fine distinctness as though the valley’s only object were to insure our seeing from Cloughphilip fields the circling panorama to the very best advantage. To the south-east is situated the famous St Ann’s Hill Hydro with its extensive grounds and in the distance – a mere two miles as the crow flies – Blarney Castle stands out clearly defined. You can walk around the boundaries of Cloughhpilip Farm with every footstep planted on it, and, with a pair of glasses, count 3,000 fertile fields and tell what each is growing. The land itself is rich and clean, responding with a ready will to all the care and pains bestowed upon it, and we are not such poor farmers, Frank and I, and our good men are the best.”
Rather bellicose in his language and self-deprecating about the benefits that he and Frank added to the farm, but it is clear to see that Benjamin loved the farm and the green lands around it. The views today will not have changed much since Benjamin’s time; below is a picture taken from Bucker’s Lane looking eastwards in the early morning sun of a snowy morning 2018. 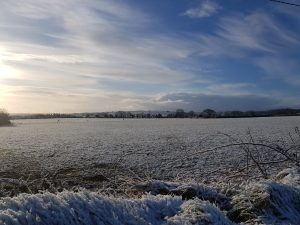 Benjamin died in 1957 at the grand age of 86, his twin Frank having passed away a few years earlier, in 1947. Their legacy still lives on in the locality, Bucker’s Lane is busy with families and farming still to this day.