"Is there anybody there?"

"Is there anybody there?"

In the September of 1874  a family of four arrived in Cork to stay in St Ann’s Hill for a few moths. Mr. Samuel Guppy, his wife Agnes and their two young sons arrived from Highbury, London and settled into their rooms at the hotel, ready to enjoy all the pleasures and treatments that both the hotel and the local area provided.
Mr. Guppy had, in fact, been an acquaintance of Dr. Richard Barter and had met with him on a number of different occasions in both London and Dublin, and it would seem that this was his first visit to Dr. Barter’s establishment. Mr. Guppy was a wealthy Spiritualist and amateur photographer who had married for the second time in 1867.
Spiritualism, the belief that the dead communicate with the living, became a fad throughout America and Europe during the 1850s. Victorian Britain embraced Spiritualism to it’s breast and indulged in dealing with paranormal, supernatural and occult, of which the most popular forms in the late Victorian period included mesmerism, clairvoyance, electro-biology, crystal-gazing, thought-reading, and above all, Spiritualism. Sir Arthur Conan Doyle, like many late Victorians, was fascinated by the possibility of communication with the departed souls.
Mrs. Guppy, Elizabeth Agnes White Nicholl, Samuel’s second wife, was a celebrated medium who hosted séances throughout Great Britain and Europe and became famous when she levitated out of one séance in her own house in Highbury to another room in Lamb’s Conduit Street, three miles away. Arthur Conan Doyle, the celebrated author of Sherlock Holmes, believed that Mrs. Guppy was genuine and that her levitation was an authentic, genuine success.
Mrs. Guppy was considered to be the queen of spiritualist circles from the mid-1860s to the early 1870s.  However, a biography in recent years, by Molly Withington-Egan, baldly states that Mrs. Guppy was a charlatan and fraud who reinvented herself from her humble roots to being the toast of Victorian society.  Marriage to Samuel Guppy gave her access to the type of people and society that could, and did, pay for her services.  Mr. Guppy was quite a bit older than Agnes and while he wasn’t ill he decided to travel, with his family, to St Ann’s to avail of some of the hydrotherapy treatments. According to Withington-Egan: 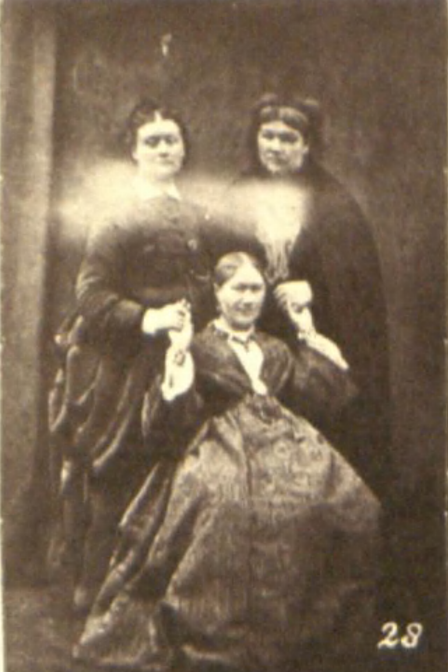 Samuel Guppy seemed to be in the midst of life, hale and hearty, full of intellectual fire, and enjoying family life. In the September of 1874, however, possibly feeling that something was not quite right, he took Elizabeth, their two infants, and a nursemaid, for a cure in Ireland, at St’s Ann Hydropathic Establishment, near Blarney, seven miles from Cork.
Mr. Guppy already knew Dr. Richard Barter (1802-1870), the proprietor, who had successfully abandoned the cold water douches of orthodoxy hydrotherapy in favor of the hot dry-air baths – the British version of the Turkish Baths. “Hot” was the operative word, and ventilation was not always exemplary. Perhaps the treatment was too rigorous for Mr Guppy, more used to pottering in clubs and billiard rooms, doing justice to his wife’s hearty cuisine, smoking his Havanas, tinkering with his chemical experiments and striving to distil spirit photographs out of the ether.

It is easy to believe that Mrs. Guppy would have performed a séance one or two evenings during her stay in the Hydro, after all they stayed for more than four months and she was celebrated throughout Victorian society as being highly skilled at contacting the dead, although I am slightly amused by one of the theories put forward by her supporters as to her authenticity, they claim that she was too heavy, too fat to go unnoticed during séances when trying to “trick” the attendees!
The guests staying at the Hydro at the time that the Guppy family was in attendance would have been familiar with séance evenings from Victorian society, possibly they already attended an evening with Mrs. Guppy and had witnessed spirits communicating by rapping and knocking, and guests consulting them on matters which were of personal importance. On the other hand though, it is interesting to think of how the staff and locals would have reacted to such evenings. Did they consider what Mrs. Guppy was doing to go against the Catholic ethos? Some sort of dark magic?
Photography, which was an emerging invention during the 1800’s, would have been relatively new to St. Ann’s Hydro during this period; some Victorians considered it to be another form of being able to contact with the dead. Mr. Guppy had a huge interest in photography and had been in touch with Georgiana Houghton who was both an artist and a Spiritualist, and also a huge fan of photography, in fact, she claimed to have produced the first ever spirit photograph in London.
Samuel died in Jan 1875 and was buried in the Church in Blarney. Friends were told that he passed away peacefully in his sleep but the death certificate paints a different picture; of some sort of fit/convulsions for a number of hours before eventually passing away:

Mrs. Guppy headed back to their house in Highbury, with their two sons, and eyebrows were raised when she married a second time only a few months later to some little controversary as her second marriage took place only five days after the final decree was granted to the married man whom she was rumored to be having an affair with.
There is lots of scandal and rumors and whispers of fraud, with regards to their interest in Spiritualism, swirling around the Guppy couple, it makes me wonder how they were received during their visit to Cork, and I am also quite curious to see what their reaction would be to the newly animated photographs that technology and innovation have produced during 2021.