It's a long way from Tipperary but even further from Donegal

It's a long way from Tipperary but even further from Donegal

Ellen Runciman, what an exotic name. The name first caught my eye when I was compiling the data a few years ago; according to Wikipedia the surname Runciman was first found in Oxfordshire where they held a family seat since the arrival of their Norman ancestors with Duke William the Conqueror in 1066. The name, being of Norman origin comes from an Old French word: “roncin,” meaning “workhorse.”
And then I recently came across Ellen Runciman once again, while researching Morning Time in the Hydro, and got to wondering how on earth did someone travel from Letterkenny, all the way up there in the furthermost tip of North-Western Ireland, down to Tower in Cork?
I know someone who married a Donegal girl and it takes them over five and half hours to travel by car, heading up to Mallow and then Limerick and onto Sligo and then snaking further up through Bundornan and Donegal town and then finally arriving at their destination. Not the most pleasant of journeys if there are kids in the car! 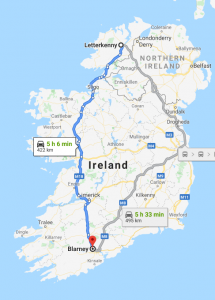 Ellen was born in Letterkenny in 1891 and in 1901 was living in a house on the Ardrumman estate in Castlewray Co Donegal with her family, father Alexander, mother Ellen and two older sisters, Maggie and Isabella. Alexander was a land steward, working in the magnificent Ardumman House, Donegal, which is now home to Richard Noble, world famous photographer.
The Ardrumman estate was situated near the picturesque Drongawn Lough and I cannot find any pictures of the house. It would seem that even the National Inventory of Architectural Heritage site doesn’t have a picture of the house
Ellen’s mother, Ellen nee Smith, was living in Peacock Lane in Cork city, now named Gerald Griffin Avenue, when she married and Alexander had registered his address as St Ann’s Hydro.  Ellen’s parents had married in 1879 in the registry office in Cork city; so it would seem that there were Runciman’s travelling up and down the length of the country between Cork and Donegal for years previously.
So how exactly would a young woman travel from Letterkenny down to Cork? To be honest, I don’t really know. More than likely Ellen may have traveled, via horse-drawn carriage of some description, a coach, to Dublin and then possibly the train to Cork. Or she may have traveled from Letterkenny to Strabane and then got the steam train to Derry and then perhaps onto Dublin.  Or maybe she would have undertaken today’s route, travelling via different carriages and coaches, taking a number of days to get from the top of the country all the way to the bottom.
But once she arrived in Cork she started work as a house maid in the Hydro hotel, according to the 1911 census. Her mother Ellen, now 60 according to this census, was a visitor to a house in South King street Dublin, where she seems to have lived until her death in 1920.  On a side note, according to her death certificate Ellen had passed away in the Harold’s Cross Hospice, I never realised it was open that long.
And in the same year as the 1911 census her father Alexander is in a house with his niece in Castletownsend. It would seem that he lived here until his death in 1920, a few months after his wife, while Ellen’s two sisters married and lived in Dublin. Ellen herself married a man from Blarney, Patrick Desmond, in 1922 and on her marriage cert she was still recorded as working in the Hydro.

The Hydro was an incredible source of employment for people in the locality, so much so that people came from the other side of the country to find steady work, settled here and had families. It is such a pity that it was closed down and the roof removed, just imagine how much employment and opportunity would be available today if the magnificent building was still standing. 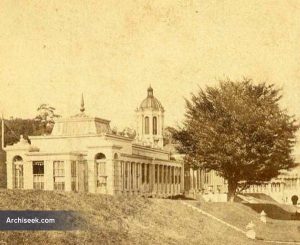