Maximilian Erneste Altdorfer was born in 1891 in St Ann’s Hill Hydro, son of Dr. Max Altdorfer and Mrs Auguste Altdorfer. His father was one of the resident physicians at the Hydro complex when Max was born.

Dr Altdorfer Snr. was born in 1852 in Gingst a small village in north-east Germany in 1852. Gingst, which is close to the Baltic sea, is a picturesque area, with national parks and waterfalls. Dr Altdorfer and his wife Augusta, nee Schmidt, lived in Bremen, Germany when their their first child Elizabeth was born, according to Elizabeth’s marriage cert. At some stage in 1887 the young family moved from here to Ireland.

Dr Altdorfer’s name first appears in an advertisement for St Ann’s Hill Hydropathic complex as one of the medical doctors in the 1891 edition of Guy’s directory. For a number of years previously Dr William E. Sack, listed as the medical superintendent at the Hydropathic establishment, was  a German national so it is possible that Dr Altorfer was enticed to move from Germany to Cork for both the opportunity to work at the first Victorian-Turkish baths in western Europe, or Roman-Irish as they are also known, and also to work with someone that he possibly knew.

It must have been a mammoth journey for the family, travelling from Germany to Cork; there is a seaport near the city of Bremen and it is possible that the Altdorfers were passengers on a ship, similar to the SS Lahn that left Bremen for Southahmpton.

From there they would have boarded another ship to the port of Cork, or maybe they took the route that would have brought them to Dublin first and then the family would make their way to Cork on the train. Or maybe they went from Hamburg directly to the port of Cork Eventually they ended up settling in one of the houses on the grounds on the Hydro hotel where they lived for about a decade.

The couples’ second child, Margarete Eileen, was born in 1888, with the birth being registered in Blarney.

Max Ernst Altdorfer, the couple’s third and final child was also born in St Ann’s in 1891.  He may have attended the local primary school in Blarney where Master O’Leary was the principal, and would have received his basic education in the three Rs, reading, writing and arithmetic here. Or maybe he was educated by a tutor in the house that the family lived in. 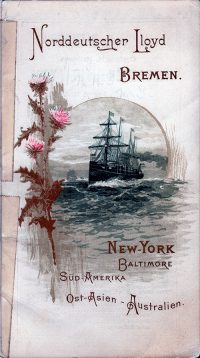 Dr Altdorfer wrote an article called “The Hot Air Bath”, a very interesting read, which details the merits and benefits of the Turkish Baths. In this article he states that he was the resident physician at St Ann’s Hill for over twelve years before moving his family back to Wiesbaden, considered to be one of the oldest spa towns in Europe, which was said to have been originally founded on a hot water spring by the Romans. 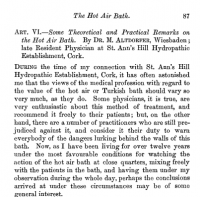 Extract from The Hot Air Bath by Dr M. Altdorfer

Wiesbaden was home to nearly two dozen hotels that offered spa facilities to the upper echelons of German society; it was especially famous in the 18th and 19th centuries, when it was frequented by people like Johann Wolfgang von Goethe, Johannes Brahms, and Fyodor Dostoyevsky, as well as various royal families.

Dr Altdorfer continued to work as doctor here and then the greater Frankfurt area until he died in 1940.

I’d like to think that working for twelve years in the Hydro was a type-of apprenticeship for Dr. Altdorfer, learning from the best in the first of it’s kind in Europe, before returning to his home-land to put into practice all that he learnt in Cork.

Max Erneste, his son, was about ten when he moved with his family back to Germany. He would have attended school in the Wiesbaden area, close to where the family lived, and then went to University where he graduated with a Business degree. He was about twenty eight when his name appeared in a newspaper listing of casualties in the German army in 1918.

Post WW1 Max embarked on a professional career in the banking world and he appears to have married in 1929. Max was very successful in his job and in 1938 was appointed an adjunct in the Office for Economic Mobilization in Germany

In 1939 he was promoted to Hauptmann (Captain) in the Luftwaffe and then in 1942 he was promoted again to Oberst, which, in the German Reich and Nazi Germany the highest field officer rank.

In 1943 he was appointed Division Chief of the Foreign Economic Mobilization, Great Britain division. All of this information comes from declassified information from the Nuremberg trials where Max Altdorfer was interrogated in September 1945. It is clear from these details that Max Altdorfer possessed an acute capacity for mathematics and economics; added to that, according to the transcripts, Max was fiercely nationalistic and had a phenomenal memory, especially for maths.

Just before midnight on New Year’s Eve 1945 Max Altdorfer died at his home in Wetlzar, a city in the state of Hesse. According to his death certificate he died of a heart attack and present at the time was his wife Paulina.

It is strange to see St Ann’s Hill mentioned in a German death and marriage certificate stating where he was born, and even more jarring is to see the name St Ann’s Hill appearing in an official transcript from the Nuremberg trials for a German citizen that was born in, what was part of the United Kingdom at that time. 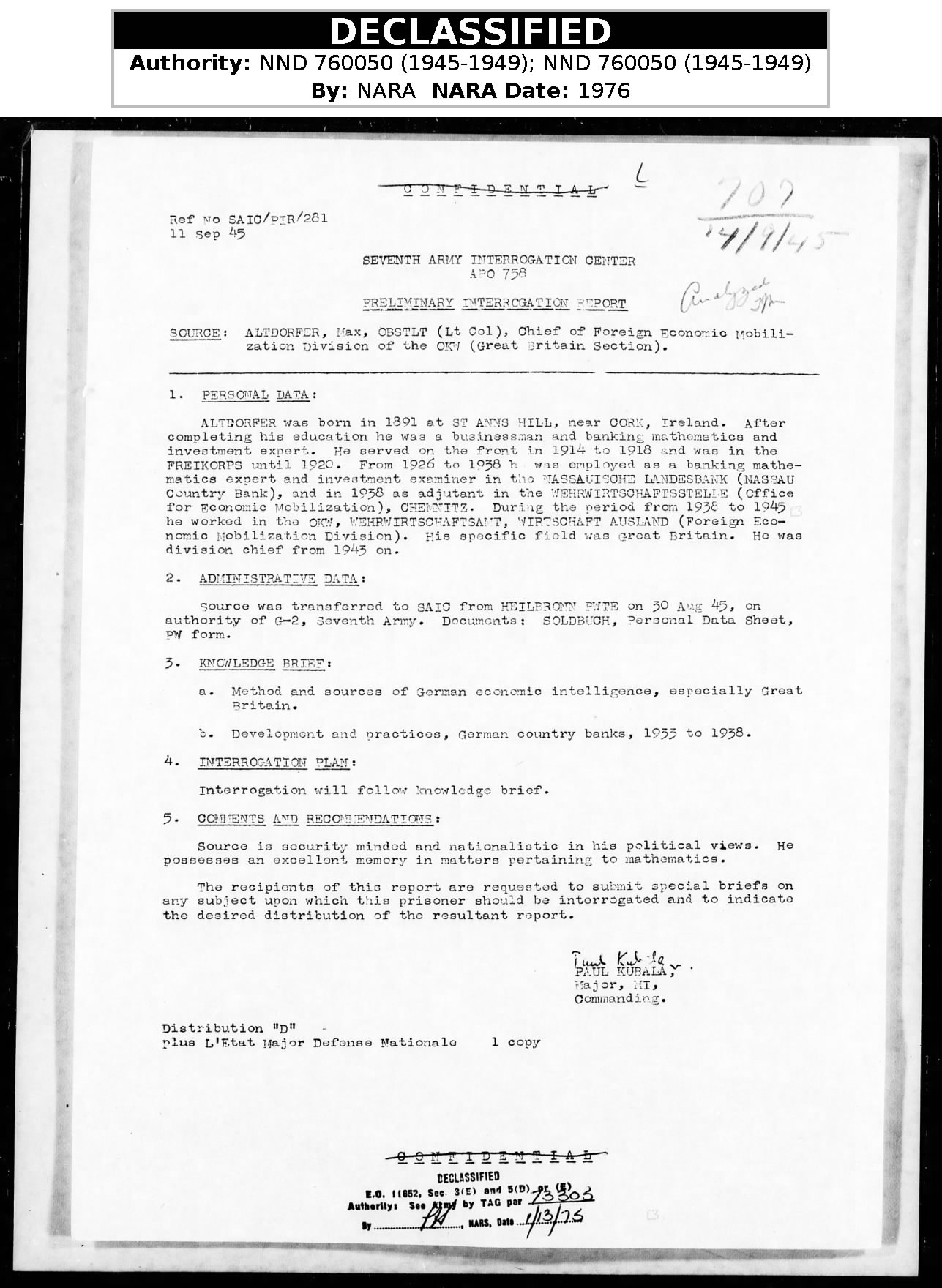 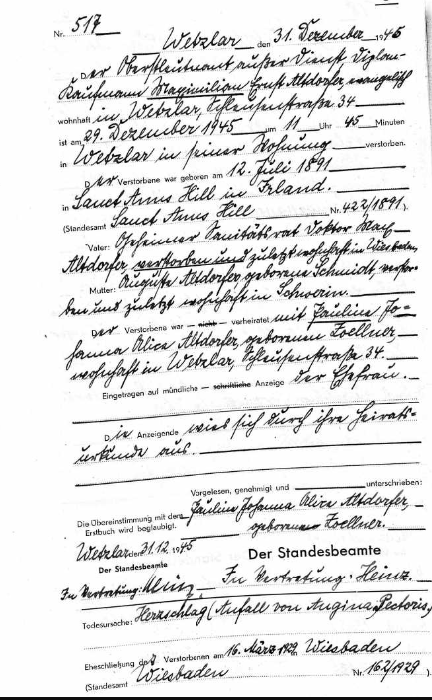 Transcript from Nuremberg trials  September 1945 and a death certificate for December 1945, both related to Max Altdorfer