This fantastic photograph was recently brought to life by the Old Ireland Twitter account, it is incredible the level of detail visible in the photograph but more than anything I was struck by the number, and quality, of presents the three Dillon children had received for Christmas. Cricket bats, train sets, tennis rackets, books, china dolls. These were very lucky children as the vast majority of children in Ireland in the very early years of 1900 would not have received any present, let alone the same number of presents that these three siblings did.

Needless to say I started to wonder what Christmas was like for my own ancestors back in 1901, while I knew it would not be filled with Christmas trees and flashing lights and advent calendars and tinsel and huge volumes of chocolate, the traditions that we follow today do not differ vastly from what happened in Blarney. 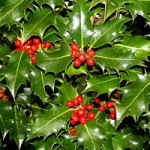 Preparation for Christmas started during Advent with a rigorous clean-up of the house and farm buildings, which included whitewashing.  Meanwhile the women of the home were busy cleaning the inside of their homes, every corner swept and cleaned and tidied. Children would have been sent out to collect greenery, holly with red berries were especially prized, the children would have swarmed out the Waterloo road, up towards the station house and onto the castle grounds searching for the prize red berries. The holly and ivy was used for adorning, windows, doorways, mantles and pictures; the use of such greenery represented the living “evergreen” Christ.

And then, most importantly, was the Christmas candle, a thick white or red candle that was lit and placed in the window at the front of the house to welcome any passing stranger, and lasted over the Christmas period. It’s not hard to imagine Millstream Row or Telephone Terrace, rows of terraced houses with candles burning brightly in the absolute black night, no street lights, no house lights, no electricity. 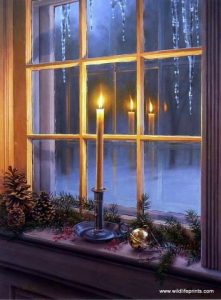 On Christmas Eve, most people would have attended confession and midnight Mass, following which a traditional supper of saltling (white fish) with potatoes and onion sauce was popular before retiring for the night in anticipation of the big day.

The Mill in Blarney would have been silent for Christmas Day , possibly the one of the very few days that production was closed and all staff had the day off. The only people who would have been working were the house and kitchen staff in the big houses, like Blarney Castle House and the Hydro hotel. The church bells of Cloghroe and Blarney would ring out calling the faithful to early mass and crowds of people would spill out of houses and streets and laneways and made their way to Christmas Day mass in Blarney. After the final blessing, everyone took turns to visit the crib in the church.  After praying devoutly, a wisp of straw was usually “borrowed” from Jesus’ crib, and retained for luck throughout the coming year.

Sir George Colthurst and his family would have been made their way by horse-drawn carriage from Blarney House, along the long driveway to the road leading into the village, around the Square and alighted at the entrance to the Church of the Resurrection and strolled up through the Yew tree walk to the families private entrance and attended service. Once the service was over the family would have returned to the House where they would have had Christmas Day lunch, worthy of any dinner in Downtown Abbey, and then retiring to the drawing room for games and perhaps children to play with toys similar to the Dillon children.

After mass in the Catholic Church of the Immaculate Conception the local families would have returned home for the highlight of the festive period, Christmas dinner. Most foods on the Christmas table of the rural smallholder was homegrown and cooked over an open turf fire. On Christmas Day, pot roasted goose was accompanied by a bread or potato stuffing made with butter and onions and flavoured with seasonal herbs, perhaps accompanied by sliced boiled ham. Spiced beef was part of the main Christmas meal in some parts of the country. Meats were accompanied by potatoes and winter vegetables. A large Christmas cake, made using spices and dried fruit soaked in alcohol, was considered a wonderful treat.

Turkey is not a native fowl to Ireland, I never knew that, hence goose or ham or spiced beef being the staple of the Christmas day meal. It was only in the early 1900’s that turkey made an appearance in Ireland after being imported from England. And I believe that póitin would have made an appearance in a lot of homes, along with whiskey and bottles of ale. So when you tuck into your delicious plate of turkey and ham and stuffing and three different kinds of potatoes take a quiet moment to raise a glass and remember our long gone ancestors who also devoured their own plate of Christmas dinner over a hundred years ago.