Morning time in the Hydro

Morning time in the Hydro 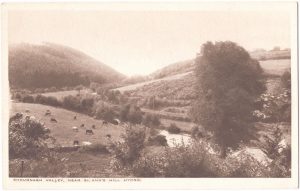 If you were to travel along the road between Tower Cross and Shournagh bridge before 6am any morning you would see few signs of life, there would be a handful of solitary cars heading to various work places or coming home from night shifts, delivery trucks bringing fresh food delivers to the Super Valu in Tower or the Centra in Blarney and there are a number of street lights lighting up the narrow footpath along the route.

On the morning of April 1st 1901 it would have been pitch black, no street lights, no delivery trucks, no lights from any house in Riverview, or Willision Park, there was no Glen Na Rí or Primrose Hill, nothing but deep darkness and silence between Tower Cross and Shourngah bridge.

But this morning, like most mornings at the turn of the century, would have started very early for Kate O’Sullivan and Bridget Tobin, more than likely well before 6am to be precise. Both ladies were employed as scullery maids in the St Ann’s Hill Hydro hotel and as anyone who has watched Downtown Abbey will know, scullery maids worked at hard, thankless tasks.

(This link will bring you to a photo on the National Library of Ireland’s Lawrence Collection, which is a collection that consists of 40,000 glass plate negatives or various scenes of Ireland taken from 1870-1914; there is a fantastic facility here where you can zoom right into the photo, can you find the maid standing in the front window looking out?! This photo was taken in 1865, it is incredible to think that over 150 years later we can see the minute details from that moment in time.)

Tasks that Kate and Bridget would have carried out would have included washing up of all the hundreds of plates and dishes, dinner plates, side plates, breakfast plates, knives and forks and spoons, tea cups and saucers, to rub and clean all sauce-pans, kettles, pots, stew-pans and all other utensils that were in use in the hotel kitchen. And they also had the task of lighting the multiple fires in the kitchen as well as under the copper or boilers for hot water.

Once those jobs were done Kate and Bridget would then have had to assist the kitchen maids in various tasks such as trimming, washing, picking and washing the vegetables and boiling them. It must have been a pretty grim task to peel hundreds of potatoes and carrots, freshly dug from the walled garden, day in day out.

On this particular morning there was nearly seventy-seven guests and boarders staying in the Hydro hotel which meant that getting breakfast organised would have been a mammoth task. And before any breakfast could have been started the fires in the kitchen would have to be lit and that was one of Kate and Bridget’s tasks.

In order to light the fire for the new day there was four steps to complete first:

So it was no wonder that Kate and Bridget stayed overnight in the staff quarters of the hotel the night before they had to start work the next day. We are not sure exactly where these staff quarters were, but we do know that the building marked in red on the map above was used for the farm hands to sleep in over night when they were working late in the evenings and early the next morning. 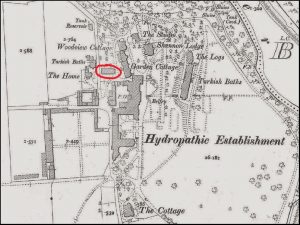 It would also appear that the scullery and domestic maids also slept in the guest rooms that were not occupied anytime that they too had to stay late or start early the following night. It is fantastic to imagine that Kate and Bridget, two humble scullery maids stayed in the ornate and luxurious rooms  that the high-class guests paid to sleep in.

On a separate note, there is a very interesting website outlining the duties and wages of all the staff working in Hinchingbrooke House, similar to that used in Downton Abbey, in the UK and according to the records for this house the average yearly income for a scullery maid was just £12; using the UK Inflation Calculator that £12 would only be worth £1,400 today. So Kate and Bridget would have worked extremely hard for their low weekly wages. 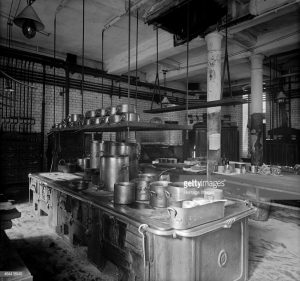 Breakfast would have consisted of homemade breads and pastries with butter and jam and marmalade, an array of cold meats, devilled kidneys, eggs – fried, scrambled, poached and boiled, mackerel pate and black pudding, porridge and Kedgeree. In other words there was a huge fare to choose from and all items were produced and sourced somewhere within the grounds of the hydro.

Tea, that may have been blended in James J Barry’s little grocery shop, on Prince’s St, would have been readily available, and coffee that was possibly imported by Guys, along with milk from the herd on the hotel grounds and fresh, crystal clear water that would have come from At Ann’s well itself, an ancient spring on the grounds of the wood which was reputed to have healing powers. Pressed apple juice from the orchard would also have been readily available.

While Kate and Bridget would have been busy cleaning or prepping the chef would have appeared in the kitchen by about 7am; Henry Hallerberg was from the Mayence area, near Frankfurt in Germany, was the head-chef in the Hydro. He too would have had rooms in the hotel, not as large or luxurious as the guest rooms but would have quarters on the grounds also.

The Hydro hotel catered to an upmarket clientele, guests included wealthy landowners, factory owners, landed gentry, doctors and professionals, senior army officers, magistrates. It was imperative that the meals produced in the hotel were of the highest quality, possibly even haute cuisine (Haute cuisine refers to the cuisine of “high-level” establishments, gourmet restaurants and luxury hotels) in order to satisfy the standards that this calibre of guest demanded as the number of hotels in Ireland began to increase in number.

According to one of the advertisements that the Hydro promoted “The cuisine is of the most liberal character, and every care is taken to ensure the utmost purity in every article of diet consumed within the walls of the establishment.”

In later years Henry moved to England and worked in a number of hotels in Devon and Fulham but in 1901 he was living and working in the Hydro while his wife Louise and young son Ernest were in Scotland.  About ten years after this Henry became a naturalised British citizen. And after Henry moved to England the role of head chef in the Hydro was taken over by Zenon Geldof, grandfather of Sir Bob Geldolf.

While the kitchen staff were busy organising breakfast the parlour maids would have been preparing the dining room for the guests.  There were two parlour maids working in the Hydro hotel on this date, Minnie Reardon and Ellen O’Leary and they would have to clean and tidy the lounge, reception and dining rooms. They would have to set the table with cutlery and china ware and glassware. They would also have been responsible for serving the guests. 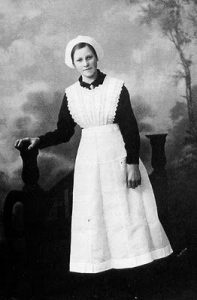 Ellen and Minnie would have been dressed similar to the parlour maid in this photo. While both women were more than likely local to the area they too stayed overnight in the staff quarters.

While Ellen and Minnie were busy getting the dining room ready for serving breakfast there was one dairy maid, Bridget McElligott who would have been hard at work multi-tasking to prepare the day’s dairy products in the dairy parlour which was located close to the back to the hotel kitchens.

Hygiene would have been of the utmost importance in this building as any hint of soap or grit could taint the milk or cream or cheese. So Bridget, who was originally from Limerick, would keep the cleanest utensils for use once the herdsman, had finished milking the herd. The herd would have grazed on the many green acres which were situated behind the enclosed walled garden.

Once all the milk was collected, the dairy maid allowed it to stay put for twenty four hours, thus preparing it for skimming. Holding a skimmer in one hand and a basin comprising a spout in the other, she carefully immerses the skimmer and gathers as much cream, later transferring it into the basin. She repeats the tedious process till the last bit of cream is removed. The cream in the basin is passed into the cream pot at regular intervals.

“Working the butter” was the phrase used to describe pressing the excess moisture from the butter when it came out of the butter churn. This picture is from the wonderful Cork Butter Museum which is well worth a visit and shows

On a separate note there is this fantastic photograph of local lady Madge Ahern who is photographed here listening to recordings of her telling her stories of life on the farm in Bawnafinny; the large picture is Madge in her younger days working as a dairy maid. It is a wonderful picture and her recordings are well worth a listen. A lot of what she talks about are tasks that Bridget would have also had to do. 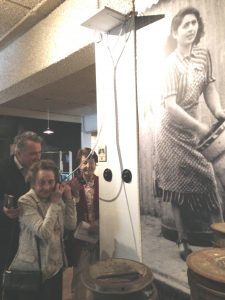 While breakfast preparation was in full throttle in the kitchen there would have been a veritable small army of house maids bustling through the rest of the hotel. On this date in 1901 there was six housemaids on duty; Julia Hickey, Margaret Hogan, Alice O’Halloran, Margaret Ryan, Ellie Ryan and Mary MCauliffe. All housemaids were from the local area and all were relatively young, the oldest 28 and the youngest 19.

Their roles would have included cleaning and tidying the reception areas, living areas and bedrooms, this would have included things liking washing the marble hearth of the fireplaces, cleaning grates, sweeping and washing floors, dusting curtains, window frames, shelves, ledges, mantlepieces and making the beds.

Using simple mathematics there was, according to Form B1 of the 1901 census, eighty bedrooms in the hotel with at least fifty being occupied by guests; so each housemaid had nearly ten rooms each to clean and tidy. Those maids would have worked very hard for their money.

As an aside, according to the same form there was one hundred and twenty three windows in the front of the hotel – washing those windows would have been an enormous task!

About this time in the morning the first Muskerry tram of the day would have arrived at St Anne’s Station and the morning’s papers would have been delivered. William Callaghan was the signalman and he lived in the lodge at the bottom of the laneway that snaked up from the main road which led from the main Blarney road towards the Hydro.

The newspapers of the day included the Cork Examiner, the Irish Times and the Irish Press, the Daily Express from London and even the Financial Times would have been delivered. Magazines and periodicals, books of fiction and poetry and non-fiction were also available for reading in the famous circulating library. As one guest recounts, “many hours were passed reading or quoting poetry. Browning was always popular.”

Maybe William’s wife Ellen, or even his daughter, eight year old Maggie, would have been entrusted with running along the laneway up to the hotel with the day’s papers and hand them over to the one of the maids in the kitchens who would then have passed them along until they ended up in the dining room and the reading room or even in the guests room.

Coming next – Daytime in the Hydro.