During the week I came across a fascinating video on the Twitter account of Irish Family Detective (thanks to Fiona for allowing me to share here).

It is a video of the Muskerry tram, from over a hundred and fifteen years ago, as it travels through Leemount Cross, over the bridge where the newly revamped The Angler’s pub is now and then coming into the terminus opposite where the River Lee hotel is today.

Watching it brought back memories of my grandmother and her stories of how she, and her sisters, would get the tram from the St. Ann’s Hill stop and travel into Cork city centre to get their “messages”, then having a cup of tea and a cream bun before getting the tram back home. Things haven’t changed too much these days with most of us still enjoying a trip into town for some shopping and something to eat, the only difference being that now most of us drive ourselves and get stuck in awful traffic trying to get in and out of car parks.

The Muskerry Light Railway line was opened in 1887. Primarily, the line was built for tourist reasons. It was to link Cork to the tourist town of Blarney with its historic castle. The supporters of the schemes also aimed to provide improved transport for passengers, livestock and farm produce between the farming area north-west of Cork and the city, and for coal and minerals in the reverse direction.

There were three stops on the Muskerry railway line between Tower cross and Blarney village. Tower Bridge, St Ann’s Hill and then the terminus in Blarney village. The station at Tower bridge was located on the Tower village side on the bridge, on the area of land above where the hockey pitch is, or used to be known as the Inch to some people. Here is a photo of the entrance, as it is today.

It is hard for us today to ever believe that a railway station once existed on this wild, overgrown patch of ground that is prone to extensive flooding. But not only was there a busy train station but opposite the entrance to the station there was a row of houses that no longer exist today either. 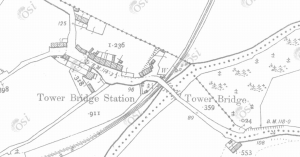 Tower Bridge Station from the OSI map circa 1895 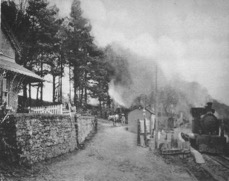 The entrance to St Ann’s Hill station is here, before it was boarded up in a past few weeks. William Callaghan was the station master in 1901 and 1911, the station was situated on what is now the main Tower to Blarney road and after the Muskerry tram line was closed down it was used as a post office for a number of years. The building was constructed of corrugated-iron and timber casement window and unfortunately, was pulled down only a few years ago. The station was the final stop for guests and visitors who were staying at the Hydro, once they alighted from the tram they were collected by hotel staff and carried by horse drawn coach the short distance to the hotel. 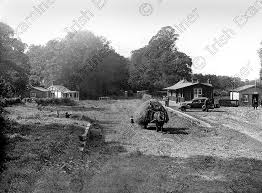 And then the terminus was in Blarney village, at the side of the Square with the entry to Blarney castle. The station master in 1901 was Andrew Forrest, and again in 1911 he is recorded as the Blarney station master. The terminus at Blarney was busy with tourists and visitors both to the village and the castle. This station is the only one of the three to still remain today, the ‘Erin Giftstore’ occupies the site of the station building, and the actual platform still remains, giving a wonderful element of continuity and a physical connection to the Blarney of yesterday. As a matter of fact, the physical building is recorded in the National Inventory of Architectural Heritage.

It is a pity that there is no such steam engine today, puffing through the green hills of Tower and Blarney bringing people into Cork city and then home again. Maybe, now that we are no longer part of Cork county and we are designated part of the city there may yet be a Luas-style tram line to link Tower and Blarney and Cork city once more.