Frances M Holmes was listed in the 1911 census returns as being a member of staff in the Huydto, her official job title was “Still Maid”. I was unsure what the duties of a still maid encompassed and wondered if there was a mis-spelling. But in fact a still maid was another way to describe a distillery room maid.

A distillery room was originally a room in hotels and large houses were medicines were prepared, cosmetics and many home cleaning products created, and home-brewed beer or wine was often made. By the early 1900’s the use of the still room had devolved to making only jams, jellies, and home-brewed beverages, and it became a store room for perishables such as cakes, pastries, breads, brioche, jams, sugar and jellies. 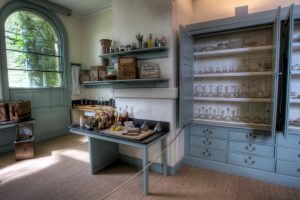 In the great Harewood House in the UK the Still Room Maid’s duties included making cakes, sandwiches, jams and jellies. She also helped the Housekeeper to prepare the morning tea trays that would be sent up to the house. So on this morning Frances would have been in charge of organising any breakfast trays that were being sent to guests in the their rooms who were did not eat in the great dining room.

In addition sandwiches, conserves, biscuits and the tea were prepared by the Still Room Maid for the afternoon tea trays. Frances would have made strawberry, raspberry and blackberry jam, all fruit grown in the gardens at the back of the Hydro, apples and crab apples would have been used to make jams, jellies, chutneys, crumbles, tarts, pies, puddings, dumplings, juices, wine, vinegar and cider. There is a fabulous recipe here for Marrow jam from the early 1900’s that the museum at Abbeyleix found in their collections.

I had to google what marrow jam was though; it is like a chutney and would have been served with cold meats and salads. And not the rather gruesome bone marrow jam I had envisaged initially!

Frances would have used different shaped moulds in order to make jellies and also ices. She would also have made what is commonly known as Queen cakes (or cupcakes as they seem to be renamed as these days!) In the early 20th century recipes for Queen cakes aplenty with books often giving the option of 4 different recipes. Currants are back into the batter and several flavourings and toppings are suggested. This site has a really interesting history of Queen cakes. 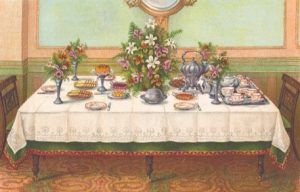 The cakes which Frances would have made would include Victoria sponges, scones, Chelsea buns, Maderia cake, shortbread, brandy snaps, cherry cakes, apple tarts, Battenburg, gur cake (or chester cake as it is known here in Cork), a traditional Irish cake made from leftovers. While gur cake may have been a little too ”basic” for some of the more refined guests Frances and Henry the chef, would have made little luxury delicacies, delicate biscuits that were very popular at the turn of the century, shaped like leaves, flowers, birds and animals. 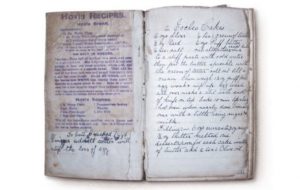 Recipes would have been written down and kept in a book in the kitchen to be used over and over again.

Frances would not have been making these cakes and breads and pastries at her own house so no additional practice. She would have spent hours and hours working in both the stifling hot kitchen and cooler still room perfecting her craft which was served to a high class clientele; she would have worked with Henry Hallerberg, the German born head chef of the Hydro and no doubt learned many pastry chef skills form him.

Frances would have been a naturally skilled and intuitive baker, the perfect candidate for the Great British Bakeoff!