Today 100 years ago, the 28th of December 1918, was election results day in Ireland; this particular election was newsworthy for a number of reasons. Firstly, the results day followed the actual polling and General Election on 14th of December 1918  which marked, for the first time in Ireland or Great Britain, the eligibility of two groups of people for the first time.

The fantastic organisation Century Ireland have a real time twitter updates on the election results; check out #GE1918 if you are interested.

All working-class men aged 21 and over were allowed to vote for the first time. And women over the age of 30 were also granted the vote, but this group had a proviso that only women who either themselves or their husband’s owned property were eligible.

On a national level this meant that the changes almost tripled the electorate from 700,000 to over two million. And it resulted in a stunning victory for the newly formed Sinn Féin party, but not wholly unexpected by the ruling class in Parliament in London at that time. 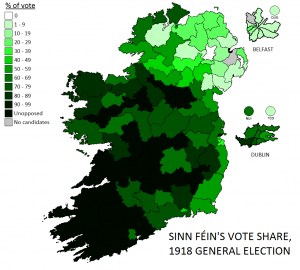 Blarney and Matehy were covered under the Mid Cork UK Parliament constituency and on a local level this meant that in the District Electoral Divisions of Blarney and Matehy there was an additional 1,488 women from the 1911 census who would become eligible to vote in 1918. And there was 1,502 men, in the same area, now voting.

And all these new voters helped to contribute to this result:

This is what the locals of 1918 would have seen, that is if they had Twitter; Terence MacSwiney was elected as the MP to represent the constituency. He was elected unopposed and went on to become Lord Mayor of Cork in 1920. He replaced D.D Sheehan (Daniel Desmond) who represented the people of Mid-Cork which comprised the districts of Ahadallane, Ballincollig, Ballyvourney, Blarney, Coachford, Farran, Inchigeelagh, Macroom, Millstreet and Shandangan between the years 1901 and 1918 when he resigned.

Locals who were farmers, woollen mill workers, pressers, drapers clerks, cooks, labourers were  able to vote once the polling station, probably the village school which was built by Sir George Colthurst only three years earlier in 1898, as opened at 8am 18th December 1918. Turnout was undoubtedly helped by the fine weather and by the fact that many employers gave their workers a half-day; not something that happens very often today!

As an aside, to ensure good order, the decision was made to restrict pub licensing hours nationally to between the hours of 11am and 5pm in all places where the election was being contested. It would appear that the authorities did not hold the general public in high regard.

The oldest person at the time of the 1911 census in Blarney was Hannah Ford who lived in a house on the grounds of Barney Castle which was owned by Sir George Colthurst. She was 103 in 1911, which meant that she was born around 1808; Hannah would have seen and lived through enormous change, that we only learn about through history books, from the introduction of Catholic emancipation, the “tithe” war, the first railway in Ireland, Daniel O’Connell, the Irish famine, the foundation of the Irish Brotherhood, Charles Stuart Parnell and the “Land” wars, The Wyndham Land Purchase Act which worked out a new scheme for tenant land purchase, Home Rule. Hannah would have lived through all of this but would not have lived long enough to experience the one entitlement that most of us take for granted today.

One of the newly eligible voters in 1918 would have been Michael O’Leary who lived in one of the houses at Mangerton Terrace in Blarney with his wife Mary and their two young sons. Michael was 42 when the 1911 census was collected and worked as a clerk in the Blarney Woollen Mills.  But because the house was owned by Martin Mahony Bros., owners of the woollen mills, Mary would not have been eligible to vote due to a restriction on the women’s eligibility that the woman or her husband met the property qualification for government elections.

So while there was progress women could only vote if they were older than 30 and either they or their husband owned property. This would have disenfranchised a sizeable section of society and it was 1921 before all women over the age of 21 would have been eligible to vote. This was a first worldwide, it was 1928 before this happened in Great Britain and 1920 in America.

One woman who would have been eligible to vote for the first time in 1918 was Anne Turpin from Dawstown Farm just outside Blarney, her husband John had purchased the farm and the house sometime in 1901 when it was in bad repair.

As an interesting aside, which ties back to all the social and economic changes that Hannah Forde had witnessed, shortly before 1920, a part of a wall in the farm yard collapsed and revealed that a sword, two pistols and a copper flask shaped container with a spring closing top for holding shot had been concealed in the wall. It would seem that the purpose of the concealment of such weapons was possibly to prevent them falling into the hands of the Whiteboys or such underground organisations; living history.

Young Felix O’Doherty was just fifteen in 1911; he lived at number 4 Shamrock Terrace in Blarney with his father Joseph, a mechanical engineer originally from Belfast, his mother Mary from Cork and his two older sisters Isabella and Ellie. Felix was a student at this time of the 1911 census and went on to become involved in the Blarney Company of Irish Volunteers. There is an extremely interesting document here at the Bureau of Military History where Felix recalls his early days when he spotted an advertisement in the “Evening Echo” for any boy that wanted to join Na Fianna Eireann, Irish National Boy Scouts and how he joined the Blarney branch.

It must be said that we take for granted the ability to vote in elections today, general elections, referendums, European elections, local elections, they come and go and we complain about how needless they are, how expensive and what a waste of money they are, how things never change, how voting doesn’t make any difference. But for the nearly 1.9 million Irish people, men and women, young and old, property owners and renters, the ability to vote in the General Election of 1918 was a momentous occasion that they did not take for granted and grasped with both hands.