The United Kingdom Census 1911 of 2 April 1911 was the 12th nationwide census conducted on the islands Great Britain and Ireland. The morning of the 2nd April March 1911, according to the weather history website, was 6 degrees, sunny with a light breeze.

Each household was responsible for filling in the requested information; namely the names, ages, religion, literacy and occupations of each person that spent the night of the 2nd April 1911 in the house.

The following day, 3rd of April, the mammoth task of collecting these forms began, all of which was carried out under the supervision of the Registrar General of Births, Deaths and Marriages, which in Cork was based in Adelaide Street.

In Blarney Royal Irish Constabulary Sergeant Henry Lett and his team of three constables, John Sheehan from Kerry who was originally a railway worker, John Donoghue, William Doyle a bookseller from Tipperary and Cornelius Driscoll, were responsible for these forms in the District Electoral Division of Blarney.

Once these forms were collected the enumerator then had to complete a number of summary forms which were returned, along with the household forms to the Registrar General.

The same task was carried out in hundreds of thousands other barracks, across both the island of Ireland and Great Britain, other teams of RIC constables and sergeants were sent forth, swarming over every single inch of the countryside, city street, cross-roads and by roads, across every boat and ship docked in harbour, up every floor of every tenement building and into every shed, barn and out-house that stood in isolation.

Sergeant Henry Lett was originally a drapers clerk from Tipperary; in 1901 he was an RIC constable based in Kanturk where he live with his wife Emily.

In 1911 he was based in the barracks in the Square in Blarney. Victor, Alexander and Henry were born to Henry and Emily in the previous decade and they lived, more than likely, in rooms above the ground floor barracks. The whole building was owned by Sir George Colthurst.

Incidentally, the following year Sergeant Lett would go on to win a medal as part of the Ballincollig RIC team who won a tug-of-war competition! 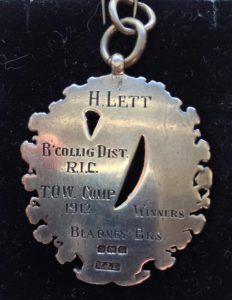 In 1911 Sergeant Lett had four constables working in Blarney Barracks on the date that the census forms were started to be collected. So like any good project manager he divided up the responsibilities.

That was nearly two hundred and ninety four houses that Constable Sheehan visited, with a total of approx. thirteen hundred people.

Blarney Barracks was also responsible for collecting the census information from other areas as well, such as Farranastig and Coolowen which are in the townland of Whitechurch and falls under the jurisdiction of Ballincollig. But Whitechurch village itself is under the constabulary district of Carraignavar so there was a different barracks responsible for the census for the village.

It’s hard to know exactly where the constables started and what order they took to visit the houses to collect the forms. We don’t know if each constable that filled in an enumerator form visited the houses in question or if another constable collected the forms and they were responsible for filling the summary forms only.

But I will take it at face value that Constable Sheehan more than likely started form the barracks in Blarney on the 3rd of April 1911 and made his way around the Square first to collect the forms, possibly starting by turning right at the front door of the barracks to head to what is now the library and AIB bank.

After completing all sides of the Square he would then have walked across to Blarney Castle House; I wonder did he just make his way to the kitchen and collect the forms from James O’Neill who was the butler according to the census; in my minds’ eye it is Mr Carson from Downton Abbey who would have answered the door! 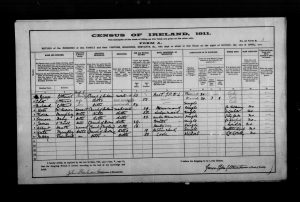 Or did Constable Sheehan go to the front door and collect the documentation from Sir George himself, Sir George St. John Colthurst, 6th Baronet had filled in the forms himself and it looks like it is his signature on the official household form.

An interesting piece of trivia, St George’s son who is listed on the census forms here was aged 24 on 02/04/1911. Sir Richard St. John Jefferyes Colthurst, 8th Baronet of Ardrum, married Cecily Charlotte Cholmondeley, who, it just so happens, to be a niece of the great George Bernard Shaw, on the 02/08/1911, four months after the census.

A very lucky individual bought at an auction five years ago a “A solid silver cigar case with dedication and a tortoise shell victorian purse” It turns out that this cigar case was presented to Sir Richard on the occasion of his marriage by Eugene Cotter, head master at the Blarney National School. What a lucky find for that buyer at the auction! 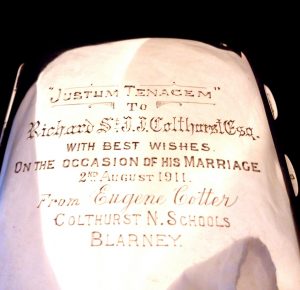 While Constable Sheehan was making way around the Square and then up to Mangerton Terrace and Millstream Row, no doubt being plied with plenty of tea and homemade brown bread, a tot or two of whiskey and dinner, Constable Cornelius Driscoll was making his way on his bicycle along the hilly lands of Killowen and Boolypatrick and then down across the  Shournagh into Kilnamucky where the Hydro hotel was situated.

No doubt Constable Driscoll was plied with tea and whiskey and dinner as well as he made his way about nearly sixty houses that were spread out.

Constable John Donoghue more than likely made his way by bicycle up the Waterloo Road and over to Knocknasuff and both Shean Upper and Lower.

It must have taken these men days to collect the forms, fill the parts which they were required to do and then summarise as per the Governments instructions. But it was worth it for us, the future generations, to get an understanding of how they lived.

So the next time there is a census in Ireland, 2021, remember that your future great grand-daughter and great grand-sons will eagerly pour over it to see how great-granny lived in the “olden-days”!