One of the people who stayed in St Ann’s Hydro on the night of the 1911 census was involved in one of the most talked about sex scandals in Dublin’s polite, and not so polite, society of the early 1900’s. Shenstone John Bishop, what a marvelous name,  was a dental surgeon who lived in number 20 on the grand Merrion Square in Dublin and was involved in a very public divorce proceedings with his wife Ethel. 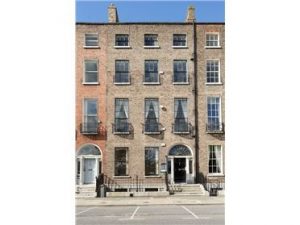 One of the houses on Merrion Square

It is hard to believe that a dentist would be the source of much scandal or drama but in this case Shenstone, and his wife Ethel were the source of one of Ireland’s polite society’s talking points. Bishop had petitioned for divorce at a time when divorce was not legal in Ireland but was recognised across the water in the UK; the subsequent court case gave rise to much drama and gossip in the press as it included tales of Mrs Bishop committing adultery with a neighbour who lived in number 72 Merrion Square, a highly respected surgeon named Dr. McArdle. 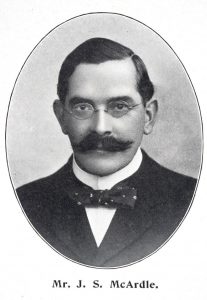 There were secretive tales of a servant girl from Clare spying on her mistress for her master, even going as far as to use opera glasses to get a closer view of the alleged illicit lovers. There were tales of late night card games and race meetings that had the public fascinated with the affair and the petition and a horrified Archbishop of Dublin who was deeply concerned by the goings on.

In 1909 a petition for divorce was instigated by John Shenstone Bishop who alleged adultery by his wife Ethel Bishop with their neighbour Dr John McArdle. The Archbishop Most Rev William Walsh of Dublin sent a request to the newspapers to not publish details of the case for fear it would harm the delicate morality of the public. The Irish Times, and other newspapers as far away as New Zealand, promptly ignored the entreaty and eagerly published details of the court case between Feb 9th 1901 and Feb 20th 1909.

On a side note, Dr John McArdle was married to Maddine in the 1901 census and then ten years later, at the 1911 census, he has a second wife, thirty years his junior named Eileen; she was younger than the three children he had with Maddine. We can only assume that his first wife died and he remarried. From the photo below once can see that Dr John McArdle was a well turned out man in the Joycean fashion of the day. Unfortunately I cannot source a picture of either Shenstone or Ethel.

“Campbell said Bishop’s wife was “an adulteress, and that her paramour and seducer was Dr McArdle”. Married 17 years with one eight-year-old daughter, the Bishops had been comparatively happy despite the fact that “she had quarrelled with every relation she had and was not on speaking terms with any of them. In more recent years, she had contracted the strongest passion for card playing and gambling in every shape, and played night after night, even until breakfast time in the houses of persons whose houses she used to frequent for the purpose”.

It was admitted that Mr Bishop took part in the above, too, but that he would leave at 11pm or midnight “being a very busy man”.

One of Mrs Bishop’s constant companions at the card games was Dr McArdle, for whom “she had conceived a regular infatuation”. She made her servant girl Margaret Cusack “her messenger for the purpose of carrying her love letters, sometimes delivering them by hand at the house of Dr McArdle”.

Cusack dropped hints to Mr Bishop about what was going on. She began to spy on Mrs Bishop for him, from upstairs windows, using opera glasses.

Healy, for Mrs Bishop, said that when she was confronted by her husband about her alleged adultery, she said it was “an infamous lie”.

Summing up, Mr Justice Andrews said where adultery was concerned, “it was scarcely possible to produce the testimony of eyewitness to the commission of such offences”.

His wisdom went further. “Race meetings and card parties might be approved of by some people and disapproved of by others. They were not necessarily connected with adultery.”

He also noted that “at an earlier period of her career” Cusack “had fallen away on one occasion from chastity”. Thoroughly confused, the jury could not arrive at a verdict. They were sent back twice and still failed to do so.”

The divorce was not granted as the jury failed to reach a verdict and so the Bishops wrote a legal deed of separation and then Ethel moved out of the house on Merrion Square and embarked on taking rooms at a number of grand hotels in the British Isles; the Imperial Hotel in Dublin, the North British Hotel in Glasgow and the railway hotel in Belfast.

In each hotel, staff members saw her accompanied by a man named Harry Raphael. Indeed, the guest book at the Belfast hotel recorded them as husband and wife – even as Mr. and Mrs. Bishop.

Far from trying to keep the affair quiet, they had intended to be seen. According to University of Guelph History professor Kevin James:

“This was frequently the purpose of such hotel visits: under the law (which in Ireland was especially restrictive), proof of adultery was often the surest way to obtain a divorce.

“Hotels were places where every flourish of the guest’s pen and every dining room foray might corroborate the facts of an illicit assignation, produce incontrovertible evidence for the courts, and free husband and wife from the shackles of a loveless marriage.” 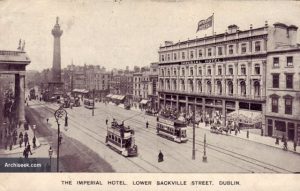 So Ethel was flaunting her adultery in public so that she could force a divorce from her husband. She must have been either a very strong woman who could not bear to stay with her husband or else she was infatuated with Harry Raphael and did not care what society thought about her.

Unfortunately I cannot find out what happened after this; I can’t find the servant girl from Clare, Margaret Cusack, who spied for Shenstone. She wasn’t in the 1911 census in the house in Merrion Square while Shenstone and his daughter was in Cork. There is no Harry Raphael in ether of the 1901 or 1911 census returns.

Shenstone was aged 44 when he and his daughter Ethel, 11, named after her mother, stayed in the Hydro hotel the night of the 1911 census. With them was Lily Pemberton, a governess for Ethel. Lily was originally from Kiliney where her family lived. I wonder would the other guests in the Hydro that night have known that Shenstone was involved in such a salacious scandal two years previously. Or would they have even cared that the goings-on were the equivalent of an episode of Eastenders.

Further adding to that sense of drama is the revelation that Shenstone went on to marry Lily the following year in November 1912. They married in the church of St Peter’s in Dublin city centre. And the marriage certificate notes in the condition column, which usually simply indicates Bachelor/Spinister, that Shenstone was previously married to Ethel Mary Curtis and that ended in divorce in Aug 1912.