We have all done it, replied to a compliment on an item of clothing we are wearing with “Thanks Hun, Penneys”. It is an accepted way to accept a compliment in a self-deprecating manner that Irish people seem to thrive on.
In 1901 there was no such retail available for people, all their clothing was homemade. For many women, however, the cost of a professional dressmaker was prohibitive and they would have to choose between buying items and making them themselves. Until the ready-wear industry grew to the point where desirable clothes were available at low prices, many middle-class and most working-class women had little choice but to sew the majority of the clothing they and their families needed.
In the census returns for 1901 there was sixteen women in the Blarney and Matehy District Electoral Division areas that had listed their occupation as a dressmaker. It is impossible to know now if they worked in a shop, in Cork city, or if they made their living from “taking in” repairs and making new items. That is one of the pieces of information that I wish was collected by the census, not just people’s occupation but also their place of work.
Only four of the sixteen were married with two being widows, all the rest were young unmarried women living at home. One of the women was a lodger from Tipperary boarding in one of the houses in Monacanappa.
It is possible that their occupation of “Dressmaker” was in fact unpaid and that they were responsible for ensuring that all family members had suitable clothing, after all, sewing and needlework was taught at school for all girls so it would seem to be a natural progression to sewing for the family. 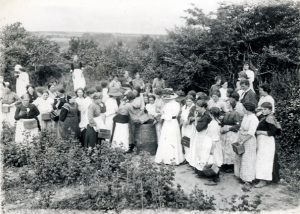 Picking raspberries near Ballincollig in 1901

In this picture, of ladies picking raspberries near Ballincollig in 1901 we get a good idea of what our great-grandmother’s wore on a day-to-day basis and what the dressmakers would have made.
Long dark woollen skirts and plain blouses, usually covered with full length aprons like in the picture. It’s very interesting to see that the young girls in the photo have two plaits, that style is particularly popular in school-going girls still today.
It is doubtful that many of the women from Blarney and the surrounding areas were able to afford their clothing from the majestically imposing Cashs retail shop on Patrick Street. Richard Allen was on Patrick Street, Cathal Goggin & Co on the corner of Patrick and Princes’ Street, Cleburne Brothers and Finns were some of the clothing shops listed in the 1895 Guys directory that our ancestors may have visited.
Also, just as a point of interest, there are nearly ninety millers/dressmakers listed in the city directory.
Unfortunately it is hard to know where these dressmakers worked or where they got their material from; possibly a trip into Cork  city, either by cycling or the Muskerry Tram,  to one of the few haberdashery shops like Dwyers on Washington Street available in the city at the time, or down to the Coal Quay to buy swathes of fabrics from the famous Shawlies.
Or, it is quite possible, that our ancestors bought their fabric from the newly opened Roches Stores shop on Patrick Street in 1911, in 1901 it was the Furniture Store which was originally opened. Lots of us still miss that shop today.
So the next time that someone compliments you on your outfit and you reply with a cheerful “Thanks Hun, Penneys” spare a thought for the Bridgets and Ellens and Marys and Hannas from long ago who had to produce the same outfits, possibly to none of the same compliments!