The circus is coming to town

The circus is coming to town

The circus came to Tower over a hundred years ago and there is no doubt it would have been a cause for huge excitement and high spirits. In April 1911 the Hudson family circus had pitched their tents and more than likely staged their show in Tower village; traveling circuses were a thrilling and welcome sight in the pre-electricity and pre-television era.

It is perhaps difficult to imagine exactly how exciting it must have been for people to see the brightly painted caravans and exotically dressed circus performers pull into their tiny village and entertain them with breath-taking acrobats and comic antics.

Back in the early 1900s, the circus was a time when families could escape from reality, take some time off their lives and spend a few hours simply being entertained in the same way that today we use television, box sets and YouTube.

William Hudson, born in Manchester in the 1840s, was travelling the Irish country side with his family circus for at least a decade by the time the 1911 census was taken. He and his wife Kate had eleven children and all were working in the family business. The family toured under the name The Turner Hudson Circus.

The eleven children ranged in ages from twenty-three all the way down to a one year old baby and all were staying in Tower the night of the 1911 census. William’s brother Joe Hudson, also a circus hand, was with them.

And the only non-family member was Patrick Rose, a twenty-one year old circus hand. It would appear that Patrick Rose had been living in the Industrial school on Roxboro Road in Limerick according to the 1901 census and then left to join the circus. That would make some story!

According to an online forum about family history within the circus world the children Sam, Kathleen and Mike were all trapeze artists. (You can visit http://www.circushistory.org/Query/Query11a.htm to see the full details).

It would appear from the census ten years earlier in 1901 that the family had been travelling further afield than Tower with their circus act as they were staying, or living, in a 4th class house in Freemount north county Cork.

There was nine of the family in a small one roomed thatch cottage. There is a small bit more detail on the family in the 1901 census that tells us that four of the children were born in county Tipperary, two in Waterford and one in Cork. It also tells us that William’s wife Kate (Catherine) was actually from Dublin.

So in true circus lore the family toured the length and breath of the country, entertaining and playing to the crowd as they went, their family growing as children were born as they moved from town to town, county to county.

One of William’s daughters Susan, married one of the circus performers, James McCormack, when they were both living in Rylane in Coachford, or possibly they could simply have been performing in Rylane at one of their many stops. An interesting aspect of the marriage and marriage cert was that Susan’s age was listed as “Minor” as she would have been fifteen when she got married.

It would appear that Susan and her husband James toured as a circus act during World War 1.

While I have been unable to find a photograph of the Hudson Circus this is a photograph members of the Wilson & Duffy Combined Circus in Strabane in 1910. The Hudson circus would have been quite similar but smaller in numbers. 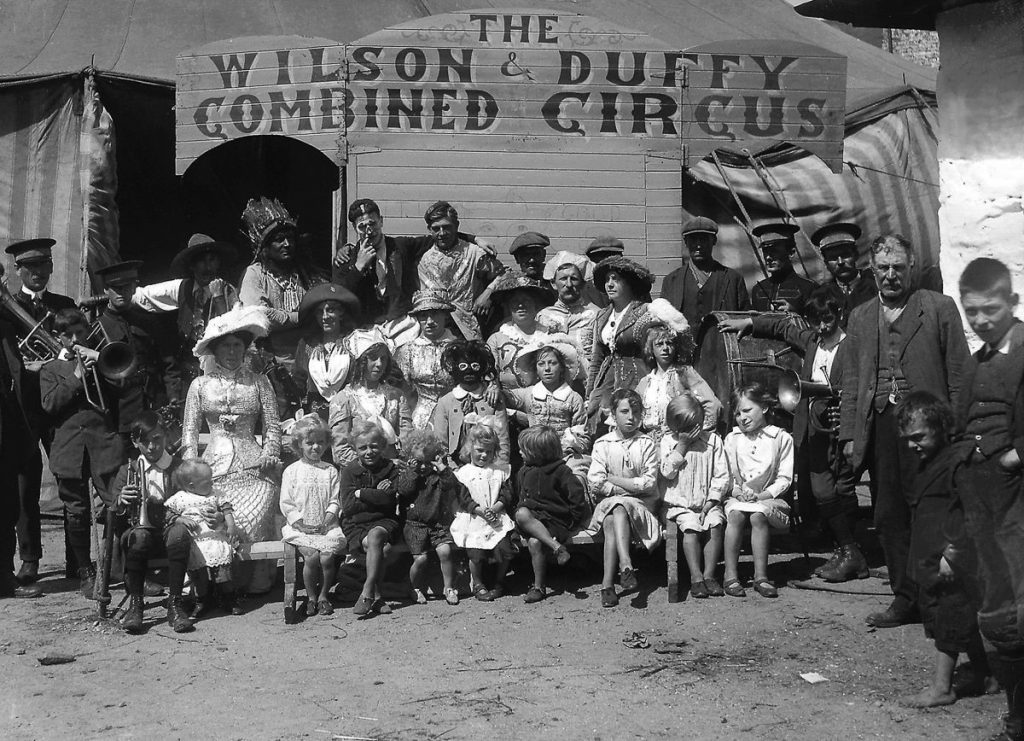 When the circus pulled up in Tower they would have pitched their tents either on the file opposite the Huntsman pub or the field alongside the old forge, where the petrol station now is; on an unrelated side note it is here that the travelling cinema would have setup in the late fifties when it came to Tower.

I am unable to confirm if the Hudson circus did indeed perform in April 1911 in Tower, or if they were just passing through. It is nice to imagine the locals of Tower village, who worked as blacksmiths, labourers, farm hands, bootmakers (there was a boot “factory” located in Tower at that time!) and housekeepers all finishing up for the day and heading to see the circus. The guests of the upmarket nearby Hydro hotel may have wandered over to the village to see the sights and enjoy the show. Its not quite on the same scale as the Ed Sheeran concerts in Cork this weekend but close!