Let there be light!

Let there be light!

A newspaper article, published in the Cork Daily Herald on 3rd of December 1891, describes in detail the newly installed system of electrical power at St Ann’s Hill Hydropathic establishment, located just outside Blarney. It is difficult to convey how innovative and groundbreaking this installation was for an enterprise, either private or public, in Cork at this time, it was practically unheard of.

While electric lighting was demonstrated publicly for the first time in Cork City on 5th August 1879, at Queen’s College Cork during the annual meeting of the British Medical Association [2] the supply of electricity to Cork city was in the hands of the Cork Electric Tramways and Lighting Company, Ltd, which started operations nearly twenty years later in 1898. [3]

There were twenty independent suppliers of electricity in the county and city of Cork, that supplied over forty-five thousand premises, which were bought out by the ESB in 1930. Unfortunately, there is no record of when each was established but it is safe to assume that St. Ann’s was one of the first. [4] The first provincial town, outside of Dublin, in Ireland to have electric powered public lighting was Carlow in 1891. [5]

The unnamed journalist who wrote the article for the Cork Daily Herald in December 1891, waxes lyrical about the beautiful surroundings in which St. Ann’s Hill was built, even going so far as to say the place would “woo the Goddess Hygael, the natural charm of the locality cannot be overlooked, the attractiveness of the surroundings are too well known to require any lengthy reference”. [6] The journalist goes on to praise the “modern improvements in science” that the Hydro has introduced, most recently under the care of Dr Altdorfer.

Without a doubt the most significant improvement that was made at this time was the introduction of electric light to the complex; all apartments, the billiards room, the reading room, the entrance hall were all fitted with Edison-Swan lamps. The journalist practically salivates at how much convenience the introduction of these new light fittings will bring; according to the article the electric light “does away with the disagreeable necessity of groping for the match box which some how or other always seems to elude one’s grasp in a dark room”. [7]

The unnamed journalist goes on to describe in detail the new setup, although it is probable that the details described in the article were actually supplied by the engineering company as the same detail, word for word, also appeared in an article printed in the Cork Constitution, also printed in December 1891.

The power is supplied from the river Shournagh, a fall of nearly twenty feet being obtained by the construction of a head race nearly one thousand yards in length. The installation consists of a vortex turbine 15 B H P, made by Gilkes & Co, Kendal, which drives direct a Statter Brunton spunt-wound dynamo of B type, with an output of 70 amperes at 135 volts, speed 1,050 revolutions. The current is conveyed underground for 200 yards by a concentric cable of 1914 strands to the establishment, where it is joined to distributing boards having fuses and switches as required. There are 82 eight-candle power lamps, 76 sixteen-candle power, and 3 thirty—two candle power, running at a pressure of 110 volts. The lamps and holders are of the Edison-Swan patent, with patent switches of porcelain, quick-break pattern. 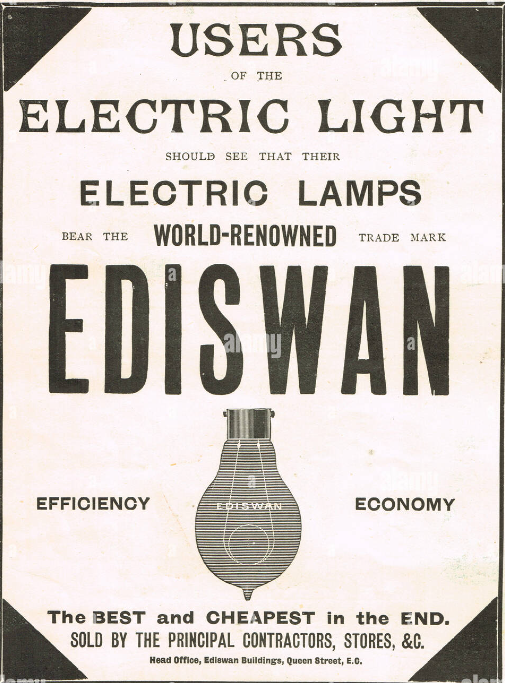 Advert from 1899 for Edison-Swan lamps 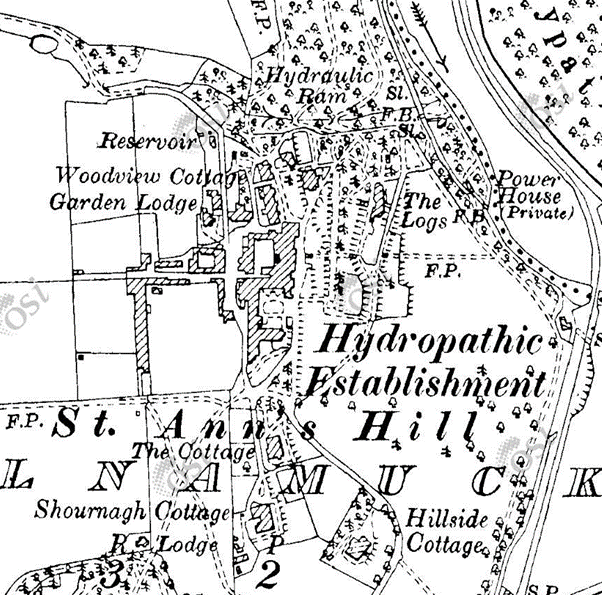 Section from the OSI map showing where the mill-race was constructed and where the power house, which housed the vortex turbine, was built. 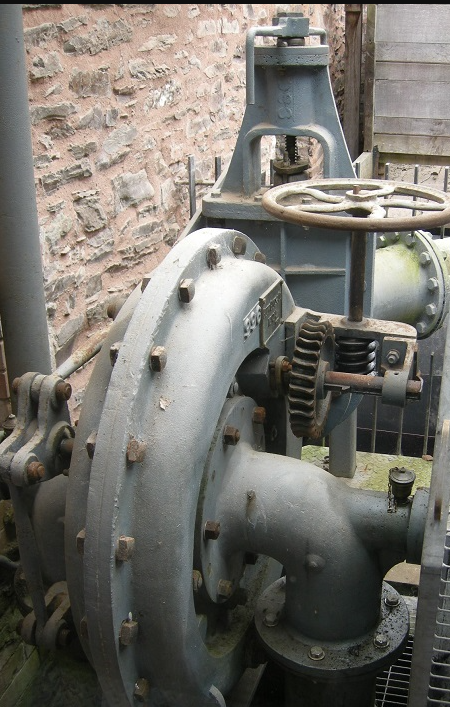 Gilkes & Co. are an engineering company founded in 1853 in Canal Head, England. The company pioneered the Vortex turbine for small hydro generated power. Gilbert Gilkes & Gordon Ltd | Hydro & Pump Specialists. A vortex turbine, bult and installed by Gilkes in St. Ann’s was similar to the one in the image below. In layman’s terms a vortex turbine generates electricity by introducing a flow of water into a tank and then using the gravitation vortex generated when the water drains from the bottom of the tank. The article then continues with further details on the hydro installation.

During the day the current is utilized to drive a Starter Brunton series, wound motor A type, 110 volts, 55 amperes, running at a speed of 1,450 revolutions per minute, and this by a Rosendale patent hair belt drives the shaft which works the agricultural and dairy machinery. The speed of the motor is regulated by a resistance and switch having six variations, and its protection is ensured by a fuse on one pole ad magnetic cut out on the other. In the dynamo room is a polished slate switch board, having a volt meter for registering the pressure, the turbine is at present in the hands of the engineers, who are fitting up a Porte-Manville electric governor which automatically opens and shuts the turbine as the load varies.

It is an arrangement driven from the shaft of the turbine, and has two poles which are drawn in and out of gear nu two electric magnets, the current to which supplied by the main building of the establishment by two pilot wires underground and regulated by a contact breaker which switches on the current into either coil of electric magnet as required/ the dairy machinery driven by the motor, consists of an Alexandra Cream Separator, which is beating all competitors out of the market, and a Thomas and Taylor’s Eccentric Churn producing 80lbs of butter at a churning. In the farm the electric force is used to drive a Corbett corn-mill, a cake crusher with two sets of rollers, a gorse sand hay chopper, a turnip pulper, circular bench circular saw, and other implements.

The new setup was based on hydro generated power, supplied from a new millrace which was constructed on the Shournagh. There was a small building nearby in which the turbines and vortex were housed, an underground cable was then laid from here about two hundred meters to the main building in the complex where newly installed fuse boards distributed the power to the various rooms. During daytime hours no electricity was used in the hotel buildings but was used in some of the dairy and agricultural buildings.

An article printed in the Cork Constitution on the same date referenced the cost of the new setup; prior to this it cost the Hydro approx. £250 per annum to light the complex with oil. This is equivalent to £22,770 today. [8] The works cost approx. £750, which did not include the cost of construction of the millrace. It was calculated that the new setup would provide free electricity to the Hydro complex after just eight years. [9] Replica of an 1892 L.M. Ericsson telephone

The newspaper article also adds interesting detail that there was a telephone in Dr. Barter’s home, based on the grounds of the Hydro complex, that connects with the dairy, electric bells were installed throughout the complex and electricity was also used in certain treatments for patients. [10]

It is difficult to convey how innovative and groundbreaking this installation was when first introduced in 1891; the Hydro had electricity six years before it was installed at Queen Victoria’s house at Balmoral. [8] It is quite likely that there were members of staff working in the Hydro in 1891 who never experienced electricity in their own homes as rural Electrification in Ireland did not happen until the early 1950s.

The only present-day comparison that seems appropriate is the possibility that the Elon Musk space trips will in fact become everyday for future generations. It must have seemed incomprehensible to people who worked in the complex, who could not read or write, to use an electric powered Alexandra cream separator or a Corbet corn-mill or a Thomas and Taylor electric butter churn in the Hydro to then go home and do the same tasks by hand. Local farmers without the benefit of electricity must have looked on with envy at the back-breaking energy efficiency that the complex had achieved.

St. Ann’s Hill Hydro was already considered groundbreaking for its’ use of medical hydro treatments but this goes someway to show how forward thinking and brave the second Dr. Barter was with his wholehearted embracing of the new technology and his willingness to invest both money, time and reputation in the new adventure. 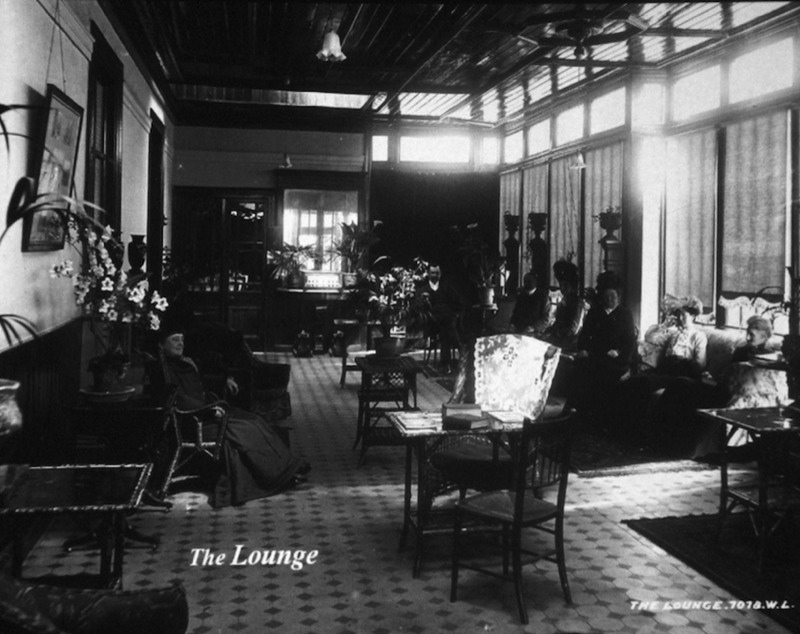 The Lounge in St. Ann’s Hill Hydro, hanging from the ceiling is one of the new Swann-electric lamps, photo taken in the late 1890’s.